Importance of Managing Talent for SESBs

Talent plays a critical role in the success of any organisation – be it a start-up, SME or even a larger corporate MNC. As a business leader,  every aspect of managing your talent (workforce) is critical in ensuring the creation of a high performing culture – and thereby a successful business.

This blog examines some of the key elements of Talent management in start-ups and SMEs.

WHAT DOES HUMAN TALENT MEAN FOR STARTUPS AND SMEs?

The absence of having the right team in place is amongst the TOP 3 REASONS why growing startups fail.

If the senior leadership isn’t united around a common vision, with a set of agreed values, things can fall apart very quickly. Apart from a lack of cohesiveness, lack of diversity (skills and thought) amongst the leadership can also be another factor in the organisation’s failure. One needs people who complement each other and look out for one another’s blind spots.

As an organization grows – say from 20 to 50 to 100 and beyond, it’s critical to get this right – have the right checks and balances in place and ensure that your organization is structured around sound principles. It’s also fair to say that this will be an iterative process – what’s right for an organization of 20 or 50 wouldn’t necessarily be right when you reach 150 employees and again when you reach 500 employees.

When you’re 15-20 people, many of whom will have started together – there is a sense of oneness, camaraderie. Natural bonding has already taken place as a result of the ups and downs, long hours worked together and battle scars everyone wears.

However, when there is a sudden influx of the next 20 or 30 or 50+ people, do you do enough to ensure that they feel the same sense of oneness and purpose? These are some of the statistics on (ineffective) employee onboarding:

A critical component of successful organisations, big and small, is their approach to effectively managing employee performance.

4.    Lack of a robust Succession Plan

One of the best ways to ensure continuity and mitigate against disruption due to employee departure is having a robust succession plan for critical roles. This is also an important way of retaining employees and providing career paths.

At the best of times, hiring good talent is a challenge. These days, one often hears the phrase “War for talent”. Hiring mistakes can be extremely costly. In a video, Tony Hsieh (ex-CEO, Zappos) has stated that hiring mistakes cost Zappos c.$ 10m over an 11 year period! That’s cash that could have been in the Bank!

A BRIEF ON BLACKBERRY

I’m now going to draw your attention to a well-known case – Blackberry. Whilst Blackberry isn’t a start-up, I think there’s also a lot that start-ups and SMEs can learn from the spectacular rise and fall of this most iconic of brands of the past 20 or so years. Like “Band-aid” and “Xerox”, Blackberry had become a synonym for smartphones.

Some basic facts as we look into this case:

These are staggering numbers by any stretch of the imagination. There are many reasons attributed to Blackberry’s fall from grace. These typically focus on things like “blinded” by its own success, ignoring the threat from competitors like Apple and Google as well as making the wrong call on how 4G would take off. However, I’m going to focus on the Human Talent elements of this case.

WHERE DID BLACKBERRY GO WRONG WITH ITS TALENT MANAGEMENT?

Some of the key elements are:

RIM had opted for a Co-CEO structure ever since Jim Balsillie was hired in 1992 by the original founder, Mike Laziridis. Laziridis was the “techie” whilst Balsillie was the “business” guy. On the face of it, there’s nothing wrong with this, it made perfect sense and clearly worked for a period of time, in the initial stages of the company’s growth. However, given the polarised nature of their roles (Product v/s Business) and the lack of an aligned vision between the Co-CEOs, the teams underneath each became more and more siloed and cracks started to appear. This greatly affected decision making and there appeared to be a lack of accountability at senior levels. The resultant negative impact on employee morale and engagement was significant.

Given the above and the resulting lack of accountability, performance management was practically non-existent in the organization. In 2009, RIM reached a settlement with the SEC relating to employee stock options. Following this, a consultants’ study into RIM’s management and boardroom practices revealed no job descriptions or metrics for the Co-CEOs.

The above consultant study also found that there was hardly any oversight relating to senior hires from the RIM Board – clearly pointing to lax hiring processes – even for senior hires.

An open letter from a senior RIM employee in June 2011 (https://bit.ly/2HxF6Hw) talks about a lack of communication and engagement between teams and a demotivated workforce. It also refers to some of the issues mentioned above – lack of performance management, accountability, poor culture and the negative effect of this on decision making in the organization.

In 2009, long time COO, Larry Conlee resigned. In 2011, RIM faced a series of senior departures. At no time did RIM have robust succession plans in place.

There are a lot of lessons start-ups and SMEs can learn from this case. Fundamentally, these focus around the areas of:

In my view, it is imperative for any start-up that has around 20 employees and growing, to focus on putting in place robust Human Talent management practices and frameworks if they are to avoid the same mistakes made by companies like Blackberry and many others.

The analogy I often use is – in construction, when we’re putting up a building, we don’t just put in 50% of the foundation first, build a few floors, then come back and complete the remaining foundation and then build additional floors, do we? So why would we do this when building a company from the ground up?

In this day and age, when most organisations say that their Human Talent is their greatest asset and competitive advantage – why would we not want to engage a professional in the Human Talent Management space who can help with laying strong foundations (frameworks) that enable us to manage our talent effectively? Why would we want to “wait until we’re bigger”, to come back to this?

With Talent Management solutions from Ren Advisory, you can focus on what you do best – running your business.

Kris is Co-Chair of the BritCham’s SESB committee. He has nearly 20 years’ experience in Talent and Human Resources (HR) roles. Kris has worked in markets across Western, Central and Eastern Europe as well as Asia, Africa and the Middle East. 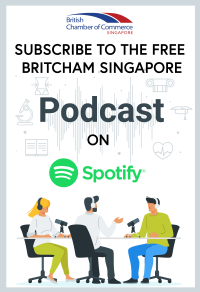